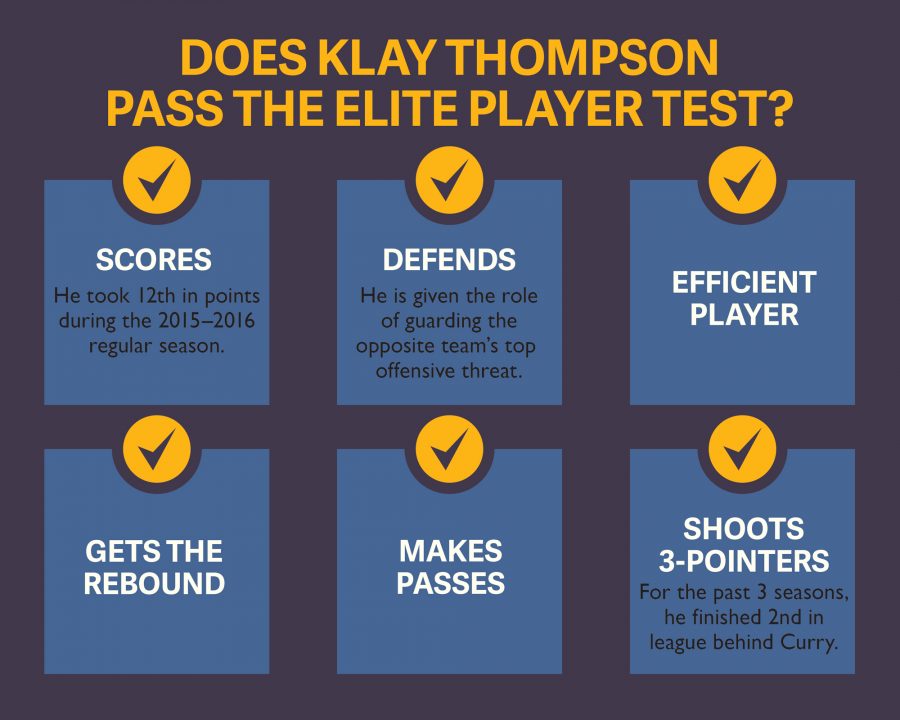 The Golden State Warriors have followed up their record-setting 2016 regular season, playing at a level that has the team poised to bring home their second championship.

One man, Steph Curry, is given a great deal of credit for his role in the team’s success, and rightfully so: the man is the best basketball player in the league, shown by his two-peat as league MVP.

Another man, Draymond Green, is praised in the sports community for his contributions to the Warriors, drawing comparisons to NBA legend Magic Johnson for his abilities to shoot, score, pass and defend. Critics will argue Russell Westbrook or Kawhi Leonard, but Green’s ability to pass, score and defend is not displayed by any player in the league except LeBron James.

Even second-year coach Steve Kerr is often credited for the Warriors’ success before the man whom I believe is equally responsible as Curry and Green is mentioned: Klay Thompson. In the past two years, Thompson has been an absolute cornerstone to the Warriors’ championship run and 73 win season, and he has proved that he is an elite player in the NBA.

Elite is a word that is almost taboo in the NBA, and experts are reluctant to give that title to a player. To earn the title, a player must dominate some part of the game of basketball, such as having the ability to score, defend, play efficiently, rebound, pass, shoot the three-pointer, lift their teammates and or take the final shot. Thompson checks enough of these boxes to be worthy of the elite label.

Can he score? Yes.

During the 2015-2016 regular season, Thompson finished 12th in points scored per game with 22.1. While 12th isn’t necessarily top in the league, it is pretty impressive when you consider Curry finished top in the league. The only other teammates that rank ahead of Curry and Thompson are their Western Conference final opponents, Kevin Durant and Russell Westbrook. Both are considered elite players in the league.

Not only does Thompson score, but he can also shoot the three-pointer better than anyone not named Steph Curry. For the past three seasons, Thompson has finished second in the league behind Curry for three point shooting, with 276 total threes on which he shot 44 percent.

This is no coincidence.

Thompson and Curry benefit from playing together because defenses struggle guarding them both from behind the arc. It is nearly impossible to defend.

Can Thompson defend? No doubt. Thompson is typically given the assignment of guarding the opposing team’s top offensive threat. And he typically gets the job done. Such is the case in the Western Conference finals. In game 1, he held Westbrook to just three first half points and in game 2 just 16 points for the game’s entirety.

These traits are enough to award Thompson with the elite label that is coveted by those in the sports world. Many fail to recognize Thompson’s level of play because he is stuck playing in the shadow of Curry.

However, this postseason has shown that he is capable of being the best offensive player on a championship contender. When Curry got injured, Thompson carried the Warriors offense through their first round series against the Houston Rockets, and their second round battle with the Portland Trailblazers. Granted, he did benefit from having Green on the court, but Thompson is currently fifth in points per game this postseason.

I know Warrior fans would never wish this, but imagine if Thompson played for another NBA franchise. He would instantly become the number one option on two-thirds of teams. I’m a diehard Boston Celtics fan, and I honestly believe that if Thompson were to suit up for the Celtics, we would be in the Eastern Conference finals today. He’s that good. Many fail to recognize this due to his surroundings.

I do not want to take away from Curry or Green, or say that Thompson is better than either player. Without Thompson on the court, the Warriors would not be the dominant force in the NBA that they are today. He is elite, and he deserves more credit for the Warriors’ success than he is given.