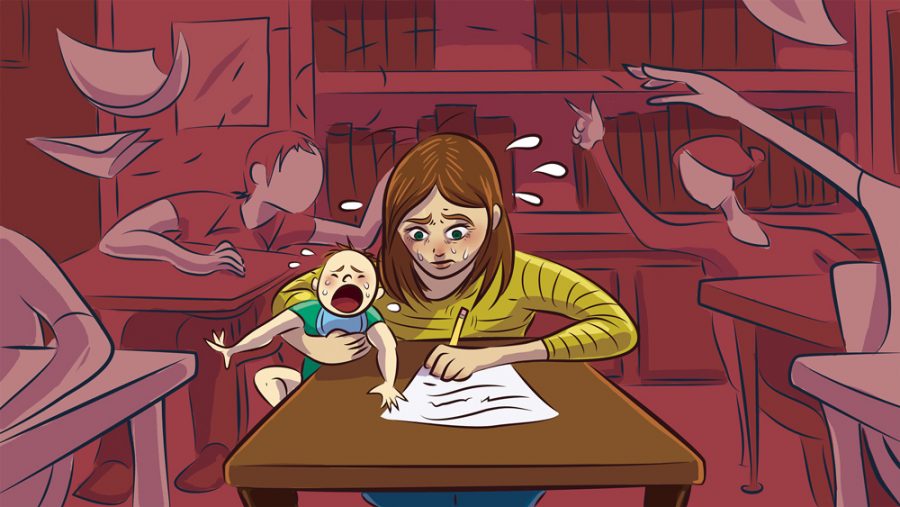 Breast pumps are quickly becoming fixtures at public high schools across California. It’s not a trend, but it might just be the reason more teenage mothers will be shopping for their caps and gowns, come graduation.

Fresno High School made headlines last month when it unveiled its brand new breastfeeding room, which provides a safe place for pregnant students and teachers to pump breast milk or nurse their babies. Through a $3,000 dollar grant through Fresno First 5, the room was furnished with a changing table, a breastfeeding chair, a refrigerator for storing breast milk, a hospital-grade breast pump and even a TV.

Fresno High won’t be the only high school to offer a space for teen mothers, but it certainly set the bar. Last October, Assembly Bill 302 mandated that all schools operated by a school district or county of education must provide a secure, private room to accommodate lactating students.

Authored by Assemblymember Cristina Garcia, D-Bell Gardens, last February, the mandate is a provision of a larger initiative that extends the rights of breastfeeding women in the workplace and other public areas.

Thanks to this new law, students will no longer have to hide in a bathroom stall while they pump. Even further, students won’t be penalized for leaving class to pump or breastfeed and will have the option of making up the work afterward.

Newborn babies need to nurse every 2-3 hours, according to Kathy Davis, nurse practitioner at Fresno High and facilitator of the breastfeeding room. Because the constant need to pump or nurse requires students to miss frequent class, high school and college-age mothers who want to feed their babies are naturally often forced to drop out of school.

By striking a balance between school and family life, this law breaks down one of the major barriers that prevents pregnant teens from staying in school and earning their diplomas. The proximity of this resource to classes and the care-based support of teachers and role models will likely encourage pregnant teens to stick with their schooling.

Many colleges also offer breastfeeding facilities for mothers, however legislation hasn’t gone so far as to apply a mandate, and resources are lacking — at least at Cal State East Bay. According to Jennifer Luna, manager of Health and Wellness Services and director of the Recreation and Wellness Center on campus, East Bay has two rooms for breastfeeding mothers: one in the Student Health and Counseling Services building, and the other in the RAW Center, which also serves as a multipurpose room.

The rooms contain basic furnishings — and the room in the RAW Center has a sound machine — yet Luna explained that they aren’t equipped to be able to store breast milk and they don’t provide breast pumps. A staff member at East Bay since 2004, Luna recalls there being a club that catered to new mothers and a daycare group that was run by ASI. However these resources are no longer offered on campus.

What if schools mandated the use of formula during school hours instead? Although it may be inconvenient, the benefits of breastfeeding, Davis says, are clear.

Breastfeeding boosts babies’ immunity through natural antibodies and protects against illnesses, infections and even allergies. A study by the National Institute for Environmental Health Scientists found that breastfed babies had a 20 percent lower risk of death between the ages of 28 days and 1 year old, than babies that were formula-fed.

In addition to the numerous health benefits, breastfeeding also establishes a strong bond between mother and baby. The American Academy of Pediatrics suggests breastfeeding for at least the first six months of a baby’s life.

Teenage pregnancy rates are on the decline, but that doesn’t mean accidents don’t happen. The Center for Disease Control reports that in 2014, birth rates dropped nine percent in women ages 15-19, 11 percent in the 15-17 age bracket and seven percent in 18-19 year-olds from 2013. According to the CDC, the reasons for the decline aren’t yet clear, but teens seem to be using birth control more successfully than in previous years.

A poisonous stigma surrounds the topic of teen pregnancy. The possible joy of an young pregnancy is often overshadowed by a heavy cloak of guilt and embarrassment. Young mothers are often spoken about as uneducated, lazy, welfare-dependent moochers off the system and many take it to heart, but in reality that’s far from the truth.

“It’s about education and health,” explained Davis. “The majority of these kids have great GPAs and are going to college. There’s a stigma that these kids are a bunch of lowlife losers, but they’re not.”

High school homecoming queen or theater enthusiast, pregnancy does not discriminate. Birth control or no birth control, it can happen to anyone you know at any time, and it does. Yet somehow, this fact seems to evade critics — the same people who believe that resources and facilities like the breastfeeding room “promote and encourage teenage pregnancy.”

This is absolutely ludicrous. As long as hormones exist, there will always be pregnant young women, whether these facilities exist or not.

Mothers are going to take care of their babies, whether it be at home or at school. If teen moms living off of welfare is such a concern, stop forcing them below the poverty line by restricting access to the educational opportunities that will better their lives.

Breastfeeding rooms are fantastic resources that fill a dire need, however much work can be done by educators and community leaders to inform young adults before a situation reaches this level. Perhaps the larger issue is the lack of consistent, accurate sex ed in public schools. The more we talk about these subjects, the less taboo they become. There’s no reason why such basic and universal experiences such as sexual health and pregnancy should be forced behind private, closed doors.