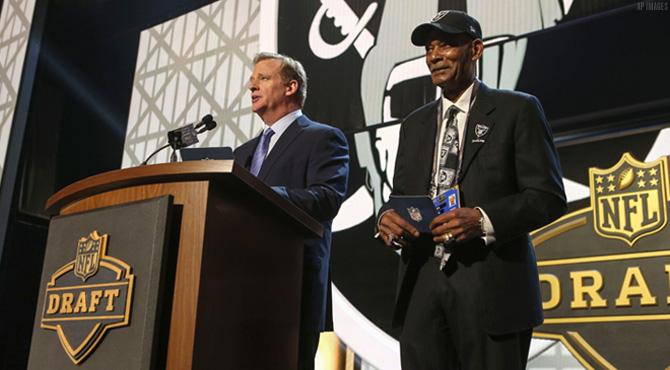 For the third consecutive year, the Oakland Raiders draft class is being praised.

NFL draft guru and ESPN expert Todd McShay and Mel Kiper Jr. both spoke favorably of the former collegiate players the Raiders added to their squad over the weekend at the 81st NFL draft in Chicago.

There was just one head-scratcher for all analysts and fans alike. The Raiders traded up in the fourth round to draft Michigan State quarterback Connor Cook. Cook was a winner during his time as a Spartan, as he captured multiple Big Ten Conference championships and compiled some gaudy statistics.

However, it was what he didn’t do that caused the stir. Red flags surrounded Cook during the evaluation process that led up to the draft, who during his four years in East Lansing, was never named a team captain. The team captains on the MSU squads are voted on by players only and as a quarterback, the most visible and arguably important position on any football team, it was a red flag that Cook was never given this honor by his teammates.

“Any guy that plays the quarterback position and is never elected a team captain clearly sets off a red flag for me,” McShay said on his ESPN radio show on Sunday.

With third-year pro quarterback Derek Carr clearly the starter and a veteran Matt McGloin a solid backup, it didn’t seem necessary to trade up to take another quarterback, but General Manager Reggie McKenzie thought different. Cook was projected as a first or second round pick by Kiper Jr. and McShay; there is no denying the value of the pick in the fourth round, but do we need a guy with red flag character concerns? I’d say no, that pick could have been better spent on a cornerback or a wide receiver, something the team did not address at all in the entire draft.

The Raiders signed veteran cornerback Sean Smith from division rival Kansas City and also got some more secondary help when they signed veteran safety Reggie Nelson from the Cincinnati Bengals. The secondary was by far the weakest position on the team and after Charles Woodson retired, it got even worse. McKenzie and the team took notice with the free agent signings and then used their first round pick on a safety from West Virginia, Karl Joseph.

Nelson and Joseph could both step into starting roles and Smith will instantly become the squad’s number one corner as soon as training camp starts in the summer. The Raiders then filled a pass rusher need vacated by Justin Tuck’s retirement, and the impending suspension of standout defensive end Aldon Smith. The silver and black took Illinois’ defensive end Jihad Ward in the second round and another Spartan in defensive end, Shilique Calhoun.

Critics blasted the second round pick since Ward suffered a knee injury in August and could require arthroscopic knee surgery, depending on a medical evaluation. They added a linebacker and a guard for depth at the positions, but also got starting running back Latavius Murray a backup when they drafted DeAndre Washington, a running back from Texas Tech. At just 5-feet-8-inches and 200 pounds, Ward is a dual threat as he caught 41 passes for 385 yards and two touchdowns. He also averaged 6.4 yards per carry for 1,492 yards and 14 touchdowns last season. The shifty change of pace back may require him to get his feet wet on special teams with Murray slated to get the bulk of the work in the backfield, but it is nice to have a backup luxury running back.

Overall, the Raiders had a solid draft and addressed some crucial needs, especially safety and pass rushers. Let’s just hope they can put it all together and make the playoffs for the first time in over 13 years.