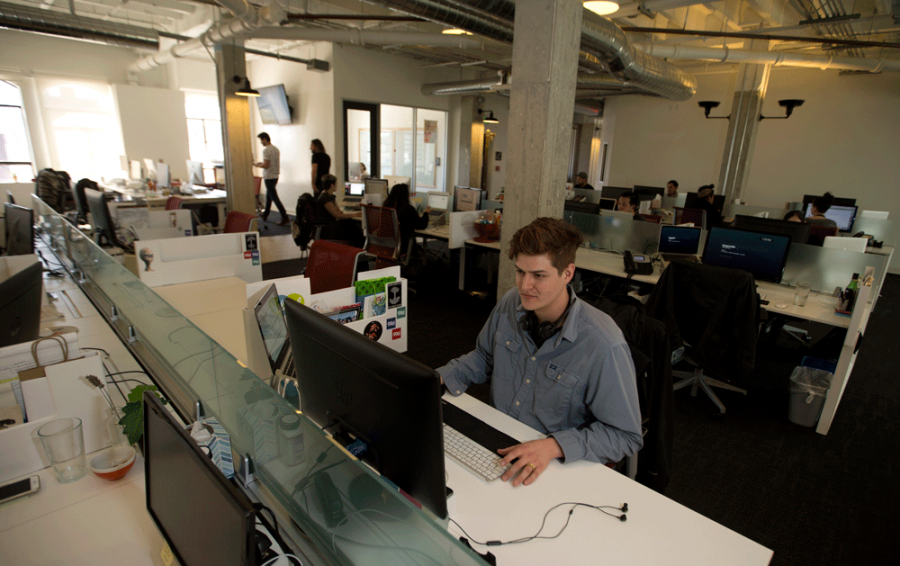 When Uber opens its massive new headquarters near downtown Oakland next year, flooding the area with as many as 3,000 workers, it will become part of an already thriving tech scene. As the city makes an effort to become more tech friendly, dozens of other startups have joined longtime anchors Pandora and Ask.com in Oakland over the past few years. The growth provides an early sign that the city may be on its way to becoming the next San Francisco or Palo Alto.

“I think in general there is a realization across most tech companies right now that there is unrealized value over in Oakland,” said T3 Advisors managing director David Bergeron, who helps tech clients find office space.

But just as Oakland’s startup culture is making a name for itself, costs in the city are skyrocketing.

Oakland’s commercial rent prices have increased by almost 34 percent this year — the biggest hike in the city’s history, according to data from JLL, a Chicago-based commercial real estate services firm. The average yearly rent for high-quality spaces in Oakland’s business district jumped from $38 per square foot in 2015, to $51 per square foot this year. That’s still cheaper than San Francisco, where average comparable rents were $75 in the first quarter of 2016, according to JLL. Rents in Palo Alto’s business district were $102 at the end of last year, according to the most recent data available.

But as a possible consolation to the higher rents, Oakland startups are drawing more attention from investors. Vas Natarajan, a partner with Palo Alto-based venture capital firm Accel partners, said five years ago, the firm had no Oakland ties. Since then, the firm has invested in graphic design company 99designs and Oakland-based mobile photography company VSCO.

“We’re crossing the bridge more than ever,” Natarajan said.

The expansion of Uber’s headquarters into Oakland likely will inspire more tech movement to the city, but the effects may not be noticeable until the office opens next year, said Amber Schiada, vice president and director of research for JLL. Uber is renovating a historic Sears building — a seven-story structure with 330,000 square feet of office space and plans for retail shopping on the ground floor.

Though tech accounted for just 3 percent of jobs last year, according to the Oakland Chamber of Commerce, the city already is winning out over the larger tech hubs in the eyes of some entrepreneurs. Graphic design startup 99designs moved its U.S. headquarters to Oakland’s uptown neighborhood last summer after the company outgrew its San Francisco space. CEO Patrick Llewellyn said after five years in San Francisco, he had some reservations about making the move across the bay.

“I was concerned about changing the routine too much,” he said.

But after struggling to find a space in San Francisco that wasn’t too expensive or in an inconvenient location, he ended up finding his dream office in Oakland’s uptown neighborhood. He’s outfitted the 14,000-square-foot space with all the quintessential startup trappings. The fully stocked kitchen, lined with huge windows that look out over Oakland, is complete with beer on tap, an espresso machine and a faucet that dispenses sparkling water. There’s an exercise area with weights and yoga mats, a pingpong table and showers.

“We’re paying about the same as we were paying in San Francisco,” Llewellyn said, “but we’re getting double the space. So it is significantly more cost effective.”

As Oakland’s startup scene expands, so do the services in the city that cater to entrepreneurs. Organizations are popping up to train aspiring tech professionals, such as the Learners Guild and LearnTech Labs. Co-working spaces also are becoming more prominent in Oakland — Impact Hub opened in 2014 in an abandoned car showroom, and the Port Workspaces expanded last year.

Many entrepreneurs also take a certain amount of pride in their Oakland location. VSCO, a digital photography startup that’s been in Oakland since 2014, says its address differentiates it from the competition.

“I think it really embodies how we see ourselves as a company,” said spokeswoman Elisa Richardson. “Scrappy and hardworking, but we are very diverse and we have an international community.”

Other companies are trying to make sure Oakland doesn’t turn into a mirror image of the tense scene in San Francisco, where tech workers are blamed for skyrocketing rents, housing shortages and clogged streets. Clef, an Oakland-based authentication startup, hosts weekly community dinners as part of an effort to connect techies and their non-tech neighbors. A year ago the company co-founded the Tech Equity Collaborative with the goal of creating a more diverse and inclusive tech ecosystem.

The city is getting involved as well. Mayor Libby Schaaf reached out to Roofstock, an online real estate investment platform, when the company launched in Oakland last month, said CEO and co-founder Gary Beasley.

“She said, ‘Listen, we’re trying to be much more business friendly, and just wanted you to know we appreciate you being in Oakland,’” Beasley said.

In 2014 Marisa Raya became Oakland’s first official liaison between the tech community and the city. The very existence of her job is a testament to the tech sector’s growing prevalence in Oakland. Raya says that growth has pushed downtown’s vacancy rate to less than 5 percent.

“That is definitely exerting some upward pressure on rents,” she said. “As a city, we’re trying to get ahead of that and offer more resources for nonprofits or cultural arts-based businesses that maybe might not be able to adjust as quickly.”

For the Pan Theater, Oakland’s commercial growth has made it hard to find additional space for rehearsals and classes. The theater’s lease is up next year, and its landlords haven’t decided if they want to renew, founder David Alger said. If they decide against it, the theater will be in a difficult position.

“For us, it is a double-edged sword,” Alger wrote in an email. “The increased population has increased show and class attendance. The downside is the impact on rents and on space availability.”