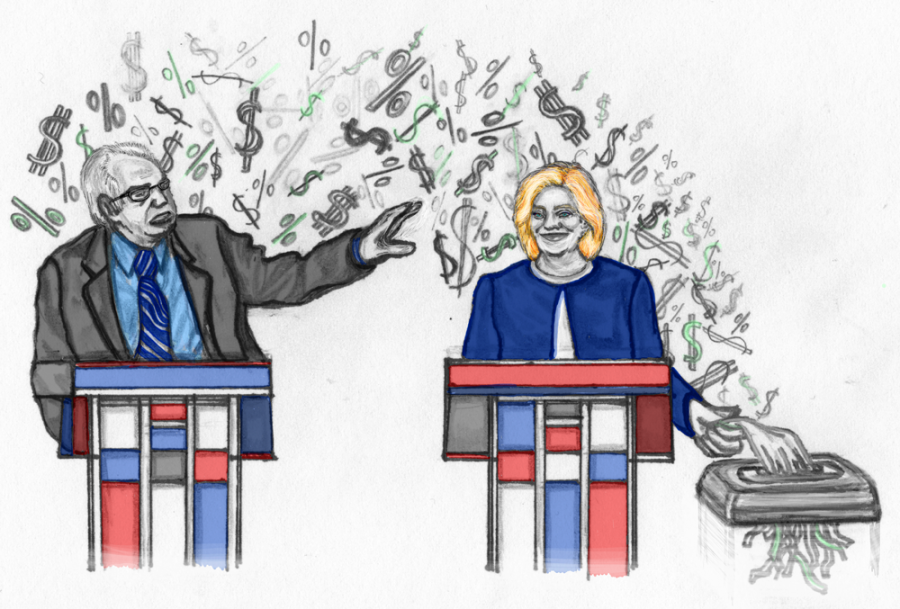 Selecting the presidential candidate who is right for you can be a difficult decision. A president’s background, ethnicity, religion and name recognition should not matter. A president must have solid policy on the most important issues to the American public such as healthcare for all and the increasing wealth gap.. Only one candidate successfully tackles these issues head-on: Bernie Sanders.

Sanders is very charismatic — not in the traditional George Clooney way — and is a down to earth person. He embodies what it means to be a normal person. His hair is shaggy, his suits do not always fit properly. He often looks more like Alfred than Batman. However, Sanders is not afraid of to speak his mind and will fight tooth and nail for the American people as he demonstrated when defending gay and lesbian military members, who have served and died, when Duke Cunningham called to remove them from service during a C-SPAN telecast in 1995.

Clinton certainly has the background to become commander in chief; she was the former secretary of state and senator of New York. She is an advocate for the cure of Alzheimer’s disease, stopping campus sexual assault and criminal justice reform. While Clinton’s resume looks amazing, she is not a better candidate than Sanders.

Clinton said that she was “dead broke” after leaving the White House during an interview with ABC’s Diane Sawyer in 2001. However, she forgot to mention that she purchased a $2.85 million dollar house just prior to leaving the White House, according to Jon Greenberg of PolitiFact. Clinton’s comments come off as if she is one of the working class — the blue collared workers, the UPS delivery drivers, the EMTs. The Clintons have made $230 million since they left the White House through speaking engagements, books, and consulting, according to Dan Alexander of Forbes.
In 2000, 33.7 percent of Americans made less than $35,000. However, in 2014, 51.43 percent of Americans make less than $35,000, according to the Social Security Administration.

“I’m more comfortable saying let’s get to $12, in a reasonable, expeditious way” said Clinton at Grinnell College, Iowa. Clinton is not comfortable fighting for the rights of citizens so she will settle halfway to the finish line.

However, an individual who works 40 hours a week, every week of the year, will still make under $25,000. Twelve dollars an hour will not suffice. The average rent for a one bedroom apartment in Oakland is $2,000 according the SFGate. If a person made $12 an hour and lived in Oakland,  it would take 166.67 hours — 4.166 work weeks — a month to pay for rent before taxes.

Sanders has been fighting for a Democratic Socialist America, where basic services such as medicare and college education are available to anyone who needs them. Sanders’ campaign is based on equaling the playing field for everybody in the nation by providing everybody with the opportunity to succeed. One percent of the nation currently owns as much wealth as the bottom 90 percent of all Americans, according to the Sanders’ campaign website. Three million Americans own as much wealth as the bottom 288 million Americans.The richest 20 billionaire own more wealth than the bottom 50 percent of Americans.

Sanders will input a progressive tax plan that appropriately taxes people according to their income. The more somebody makes, the higher percentage they will be taxed, said Alan Cole and Scott Greenberg of the Tax Foundation.

Social Security funds have dwindled because people who make more than $118,500 are not taxed on money over that value. For instance, people who currently make $10,000 $75,000 or $118,500 a year get taxed on that full amount, whereas a person who makes $5 million a year is only taxed up to $118,500. The other $4,750,000 goes untaxed by Social Security. Sanders plans to lift the Social Security income tax cap above $250,000 according to Alan Cole and Scott Greenberg of Tax Foundation.

Clinton supported the war with Iraq, stating that Saddam had spent years developing a nuclear program and funding Al Qaeda, which were later proven false. As Secretary of State, she supported the invasion of Libya, which ultimately served to destabilize the region, according to Conor Friedersdorf of the Atlantic. Libya has been in a constant state of civil war and unrest since we invaded them. Google “Libya” and you will find more pictures of destruction than life.

If Clinton is elected, the same fate awaits Syria, said Jeffrey Sachs of the Huffington Post.

According to Neta Crawford of Brown University, the last war led to the death of 165,000 Iraqi civilians. Four thousand four hundred eighty-six American soldier lives were lost and there is now $7 trillion owed in projected interest payments since the war was funded by borrowed money, reports Michael B. Kelley of Business Insider.

Lastly, Clinton is currently under investigation by the FBI for owning a private web server which may have contained top secret documents. Before the investigation began, Clinton deleted the emails which were slated to be reviewed by the FBI, said Natasha Bertrand of Business Insider. Clinton appears to have been hiding the evidence which looks very guilty. Sanders’ only run-in with the law was in August of 1963, where he was charged with resisting arrest after protesting segregation at a school in south-side Chicago says Tim Murphy of Mother Jones.

Sanders has been the only consistent politician and person in the presidential race. For the last 50 years he has been an advocate of equal rights, and fights oppressive governmental economic policy. He is opposed to social, racial and economic inequality, regime change and senseless wars. Because of this, Sanders is the only choice to be the 45th President of the United States.