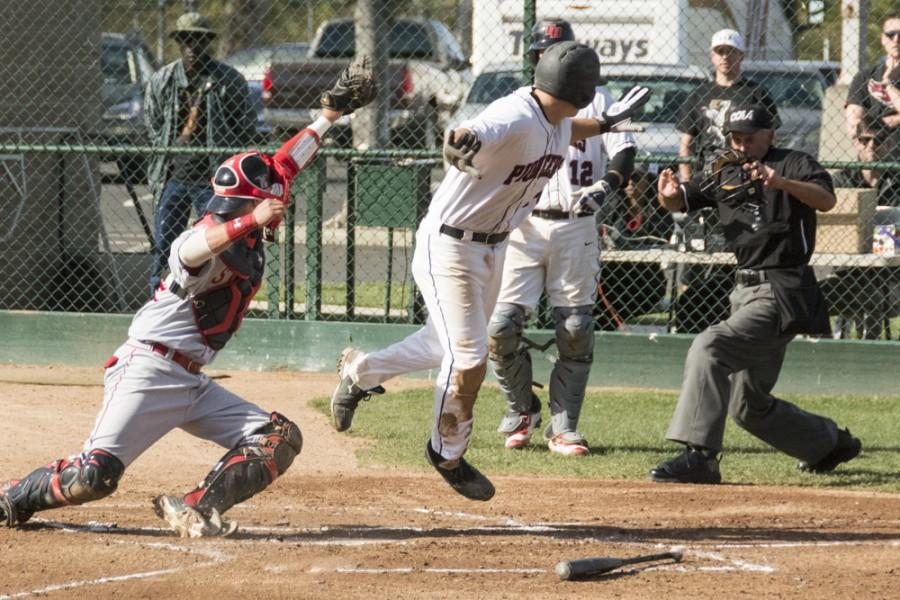 Despite a 2-2 recent series, the Cal State East Bay baseball team is still off to a great start.

CSUEB is now 11-4 overall and 2-2 in California Collegiate Athletic Association Conference games after splitting a four-game series at East Bay and Stanislaus State (9-5 overall, 2-2 conference) over the weekend.  At this point last season the Pioneers were just 4-8 overall and finished 21-26 overall and missed out on the postseason.

It was a pitcher’s duel in the first game of the series and CSUEB was up for the challenge. Sophomore pitcher Alex Vesia was brilliant on the mound through four innings but the Warriors got to him in the fifth. Vesia allowed two walks in the bottom of the fifth inning and after a fielding error CSUS scored to make the score 1-0.

Vesia found some more trouble in the bottom of the sixth inning primarily thanks to Warriors senior catcher Erik Colombini who belted a homerun to left field and made the score 2-0. CSUS added another run in the sixth when senior outfielder Scott Stetson singled and junior third baseman Aldo Koutsoyanopulos laced a double down the right field line for a 3-0 Warriors advantage.

The Pioneers mounted a comeback in their last at bat in the top of the ninth inning. Junior infielder Michael Thomas led off the inning and hammered a triple to right field on a full count from sophomore pitcher Tyler Murphy. Murphy nearly pitched a complete game but Warriors reliever, freshman Micah Hall, came into close out the game and secures the 3-1 win.

“Sometimes you get in that zone,” Murphy said. “I was feeling it.”

Vesia picked up the loss for East Bay while Murphy got his second win and Hall his second save of the season. It was another close contest in the second game of the series, but this time CSUEB jumped out in front early. With 2 outs in the bottom of the first inning sophomore infielder Dakota Conners singled which scored Thomas for a quick 1-0 lead. The 2 out rally continued for the Pioneers when junior first baseman Troy Resch knocked a double to right field and scored Conners and senior outfielder Myles Babitt for a quick 3-0 lead.

Things stayed that way until the top of the third inning when CSUEB sophomore pitcher from Fremont, Jacob Call, ran into some trouble.

Stanislaus’ rally started thanks to a throwing error and after a pitching change, East Bay found themselves down 5-3. The Pioneers tied the game at 5 in the sixth inning when freshman Joey Dice hit a double to center field that scored junior outfielder Kris Bartlett and senior catcher Chris Porter.

The bench exploded and so did Bartlett after the game-tying play that shifted the momentum in favor of the Pioneers. “Let’s go!” Bartlett exclaimed. “That’s how you do it!”

Home runs by the Warriors in the seventh and eighth innings were enough to stall the late comeback effort by East Bay and they eventually fell 8-7. Junior pitcher Joshua Kubiske recorded the loss for the Pioneers while junior pitcher Nick Voumard picked up his third win of the season. Resch led the way for CSUEB in the loss as he recorded 2 hits and 3 RBI’s in the loss. Conners and junior outfielder Marcus Wise had the other two runs batted in for the Pioneers.

East Bay didn’t let the two losses discourage them; in fact they bounced back strong and took the final two games of the series, 7-3 and 7-5.

Resch had an RBI and scored in the first inning, which gave East Bay a quick 2-0 lead. The Warriors scored in the second and fourth innings to take a 3-2 lead, but CSUEB took back the lead and never looked back.  Babitt, Wise, Dice and senior Rudy Navarro all had RBI’s to help secure the 7-3 win.

Sophomore pitcher Donovan Ramirez got the win and junior Nick Sergi picked up the save. Dice led the way for the Pioneers with 3 hits in 3 at bats, drove in 2 runs and scored once in the win.

Despite the close 2 run advantage in the final game of the series, the Pioneers controlled much of the game and closed out the Warriors in game four, 7-5. After a fourth inning CSUEB rally, the Pioneers were up 4-1 going into the fifth inning. East Bay added runs in the fifth, eighth and ninth innings to secure the victory and hold off a late CSUS push.  Senior pitcher Cole Compton picked up the victory and junior Derek Oetken got the save in the triumph.

The Pioneers will welcome fellow CCAA conference member Chico State (12-4, 2-2) to Pioneer Baseball Field for a four-game series that starts tomorrow at 2 p.m.

The two teams will play a doubleheader on Saturday at 11 a.m. and the final game of the series will be at 11 a.m. on Sunday.