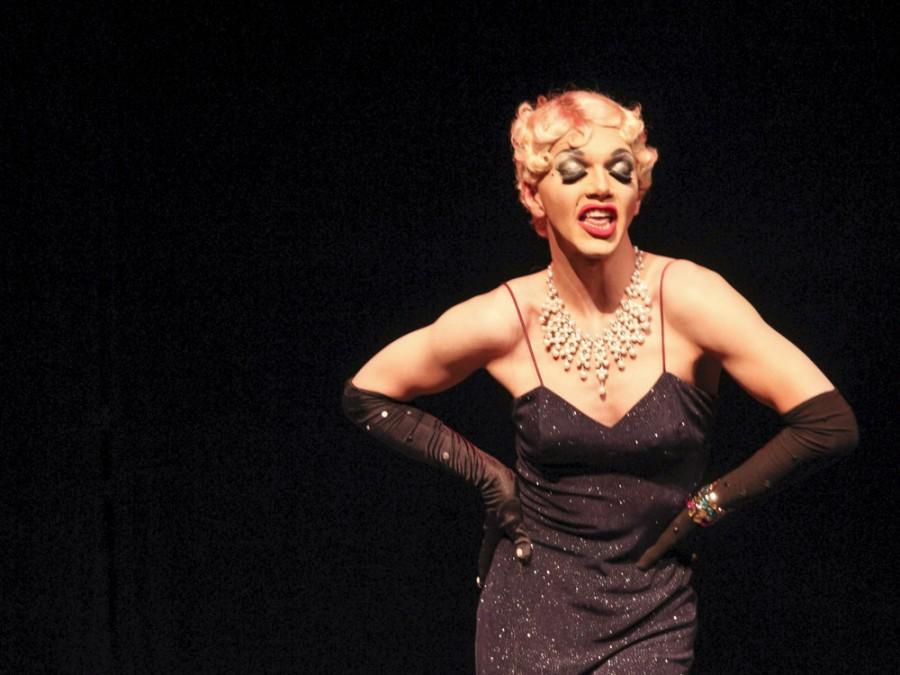 Scarlett Letters stood in her lingerie and adjusted her fake breast as music from the opening act, GAYmous played from the main stage in the background.

Next to her, Laundra Tyme made her final fixings and put on her large blonde wig, while Johnny Rockitt tried on a Stormtrooper helmet for her sultry strip tease number.

In the whirlwind of makeup, hairspray and chatter, the performers prepared to take the stage for the Diversity and Inclusion Student Center’s Fourth Annual Drag Show at Cal State East Bay.

The event took place on Jan. 28 at the University Theater as students and faculty watched Bay Area drag queens take center stage and perform the alluring art of drag.

The Queens come to East Bay

This year brought familiar and new queens to the show, with returning performers host Laundra Tyme, Scarlett Letters, Johnny Rockitt, Honey Mahogany and Suppositori Spelling as well as Grace Towers and VivvyAnne ForeverMORE, who performed for the first time at CSU East Bay.

The event introduced a wide range of drag performances, which included traditional lip sync, interpretive dance, live singing and an experimental art performance. The night also included several acts of audience participation, such as audience members being invited on stage one by one by the queens as they demonstrated their own runway walks across the theatre stage.

A drag queen is a person, usually male, who dresses up in “drag” by wearing items that would typically be worn by women such as makeup, clothing, nails and eyelashes for entertainment; these artists perform female gender roles with exaggerated femininity and camp aesthetics, often times for comedic, dramatic or satirical effect.

This art form dates back to ancient Roman literature, classical Chinese and Japanese theatre, as well as the times of Shakespeare when women were not permitted in the theatre performances and males would traditionally perform the female parts.

Drag is still a common art form used today, as there are many clubs, bars and shows dedicated to Drag Queen performances, including a popular bar in Oakland called White Horse Inn where there are monthly drag shows. Drag has also hit the mainstream media and is shown in the films of John Waters and t.v. shows like RuPaul’s Drag Race.

Drag in the Media

RuPaul’s Drag Race is a reality show competition t.v. series that searches for “America’s next drag superstar,” according to the shows’ website. Scarlett Letters talked about the problems and benefits of the show for the drag community.

“It’s not that I don’t think that things like RuPaul’s Drag Race haven’t done a lot for the exposure of drag in terms of bringing it to the masses; I just don’t think that the mass commodification of any artistic endeavor is necessarily a good thing,” she explained. “That being said, I think probably none of us would be here without RuPaul’s Drag Race because it’s created a resurgence in the interest of drag again.”

Honey Mahogany, who was a contestant on RuPaul’s Drag Race for season five, explained that before the show aired, drag was almost non-existent.

“[Now] nearly everyone wants to try to be a drag queen, which before that wasn’t necessarily the case.” She said that because drag is at a high point in media, it is now used as a way to represent and stereotype the gay community.

Drag is Cheaper than Therapy

However, for these San Francisco queens, drag is much more than what is seen on RuPaul’s Drag Race, because it is more than what you can see on the outside.

Honey Mahogany explained that drag is a way to “express the forbidden feminine side” in herself, and felt that she did not fit the dichotomy of male and female genders; she was able to fully embrace herself through this art form.

Drag culture led VivvyAnne ForeverMORE to form a community and build friendships with her fellow drag queens as they travel and perform shows together around the area.

Grace Towers, who performs bearded lady drag, expressed that drag has been a “personal journey in finding how I present myself and my gender,” as she continues to push those limits for herself and the people around her through performance.

Just like her seductive lip sync performance to the Pussycat Dolls “Hush Hush; Hush Hush,” or her intense interpretive dance tribute to David Bowie, she was able to use her art to get the audience to question their own perception of gender.

“Everyone tends to get along even if they’re in a different scene or style,” Suppositori Spelling told the Pioneer. Scarlett Letters characterized her drag as therapeutic because she works out the depression and issues she has in her life through performance and cites Spelling for saying “drag is cheaper than therapy.”

SF, a different kind of Drag

While the mainstream depicts a certain type of drag queen, Suppositori Spelling explains that there is a wide range of performances, styles and queens in the Bay Area.

“[San Francisco has] lots of different flavors of drag… a lot of places tends to be one style, [but] not here,” said Spelling, who described her drag for the evening as being highly demonstrative, theatrical and intense, representative of the area’s dark wave drag.

“[San Francisco] is one of the only places you can go where underground art stars are taken more seriously than people who can do a mainstream kind of drag,” said performer Scarlett Letters.

Scarlett Letters attributes the city as being open to weirder stuff because of the different appetite the city has for entertainment.

She continued that this area does not have the same homogony as other cities, where one style of drag seems to dominate or have more respectability over other styles.

Students scream for the Queens

Cesar Alcala, CSUEB student, said that he learned from the show that drag is different depending on the area a queen comes from, and that “RuPaul drag queens are not the only kind of drag queens.”

As the drag queens performed throughout the night, they captivated an audience that had mostly been exposed to drag through the media or had just experience it for the first time.

Whether exposed to the art prior to the event or not, the audience was presented with unique varieties of drag that the Bay Area has to offer. For those who acquired an appetite for drag, this area has something for everyone.

This event being student Alison Cordova’s first drag show, she is now hungry for more and stated that “I would definitely go to another drag show,” because it was a fun and great experience.