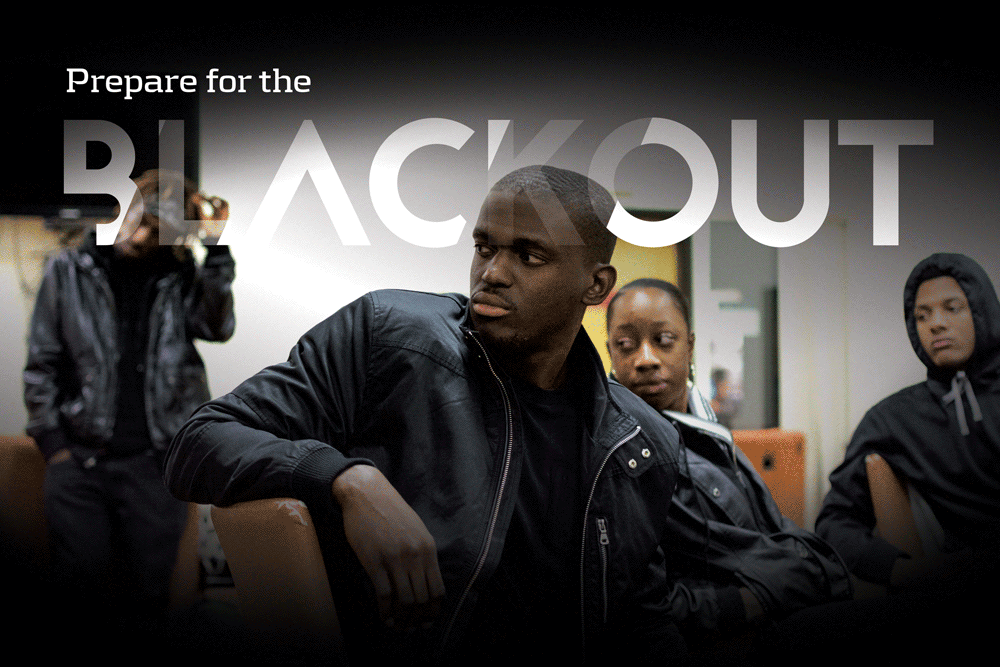 A new student collective has formed on Cal State East Bay’s campus —  East Bay Blackout. Although it’s not yet recognized as a club and it’s too early in the developmental stages to be considered a movement, all of the students are acquainted through other African American clubs and organizations concerned with the quality of support and educational development for Black students.

Last month, members had been circulating the words “East Bay Blackout” with a silhouette of a fist and the hashtag #BlackAtTheBay on Instagram and Facebook, then formed a GroupMe chat named BlackOut. Members then decided to wear all black and gather on campus on Dec. 2 with an aim to, “take a stand against all of the current injustices happening to Black people and students nationwide.”

On the day of the BlackOut, John Legend’s voice rang out over the University Union Plaza from a lone boombox: “One day, when the glory comes it’ll be ours, it’ll be ours.” The chilling chorus from the Academy Award winning song “Glory”, written in commemoration of the Civil Rights Montgomery marches in Selma, was being used to set the tone for the event. Dozens of East Bay Blackout group members, all dressed in black, set up a table in the union plaza to talk to the campus about issues they feel concern Black students.

Student volunteers at the table included leadership from the Black Student Union, Naturally Me a newly established club focused on black art, health, and historically Black Greek Letter Organizations — all of which are clubs and organizations active and recognized by the university.

Members of the collective working at the table also shared a list of 10 demands for the University titled #BlackAtTheBay. The demands listed a need for greater resources, services and academic support for Black students and student organizations on East Bay’s campus that serve the black community. More than 100 people signed a petition in support of the group’s demands, counted BlackOut member Alyssa Steverson.

[mks_pullquote align=”left” width=”300″ size=”28″ bg_color=”#000000″ txt_color=”#ffffff”]“How can you talk about diversity and how can we talk about how diverse we are and what a shining example we are when you take a look at our faculty? ”[/mks_pullquote]

Michelle Fletcher, a member of Naturally Me, helped come up with the list of demands and mentioned an ongoing fundraiser. She said that they were able to raise $400 in their first day. The money will be used for future BlackOut events and seed money to establish a Black Student Government they would like to see on campus as a part of their demands.

From noon to 4 p.m., members of the collective sold Krispy Kreme donuts, and asked people to fill in the blanks of a cue card that stated what kinds of injustices they were tired of seeing or being victim to. Those not wearing black could receive a black ribbon to show solidarity with the group’s efforts.

Breana Brownfield from the Naturally Me club, said that BlackOut began forming after noticing that in order to host events in housing or get funding from Associated Students Inc. they had to change the words in their descriptions from Black to cultural for the sake of being inclusive. According to a blog post written by Selina Smith, an initiator of the BlackOut collective, The Naturally Me group originally wanted to be called Unapologetically Black but they were, “highly encouraged by faculty to come up with a different name, a more inclusive name. They ended up going with Naturally Me, but feel as though the name does not fully reflect the club’s purpose.”

The list of demands initially grew from a desire to have a designated room for events meant to create a safe and supportive space. “We want an Afro Room where it’s our space and we can feel comfortable.” said Brownfield. The collective also demands CSUEB to increase the population of Black faculty, Black counselors in Academic Advising and Career Education and Black administrators in the Student Health and Counseling Center. The group also expressed a need for a Black Student Government where students can influence decisions regarding cultural awareness and sensitivity training for faculty and staff and added that they want CSUEB to hire more than one African American to serve on President Morishita’s Administrative team.

Visitors were also invited to attend a meeting that night for an open discussion. The discussion was led by Alyssa Steverson, President of Naturally Me and member of Alpha Kappa Alpha Sorority, Inc. Although the invitation was extended as informational to everyone, most of the attendees consisted of other Black student leaders who already had varying degrees of involvement with the BlackOut through the GroupMe chat.

Everyone trudged into El Dorado Hall in small groups. Posted on the wall, upon entry, were student written comments from earlier in the day — “I’m tired of being harassed and dehumanized by law enforcement”, “I’m tired of being an object of entertainment”, “I am tired of my culture being misappropriated.” Row upon row of comments were taped on the wall and people stared un-movingly at the feelings of dejection from their peers while letting the words of “Alright” by Kendrick Lamar wash over the room: “My knees gettin’ weak and my gun might blow but we gone be alright.”

Energy and momentum of the meeting picked up as the the topics turned from what it means to be Black at East Bay to ways of implementing positive change for Black students and the BlackOut effort going forward. At the end of the meeting everyone pushed the tables together to share a meal. It was after 11 p.m. and despite the heaviness of the topics discussed, no one was in a rush to leave the space.

Fletcher, also speaks to her experience of not seeing Blacks represented within the faculty despite a diverse student body. “I’ve had my first Black professor this year and I’m graduating in the Spring and I’ve been here for four years. That within itself says a lot.” Other students interviewed at the meeting commented on being the only Black students in their classes and not ever seeing a Black professor, especially those majoring in Business and Science.
Most of the students who participated in the BlackOut are familiar with experiences of isolation and know one another through the few on campus clubs that seek to support foster an academically enriching atmosphere for the Black community.

Similar “blackouts”, as a form of protest, have been organized by students at Dartmouth, NYU and Brown University in solidarity with a student’s hunger strike and protests at the University of Missouri whose president resigned after turning a blind eye to a history of racial incidents at the university.
In addition students demanded an increase in Black faculty from three percent to 10 percent in the coming years. Locally, Black student government leaders at UC Berkeley hosted a rally on Dec. 4, to discuss environmental racist harm caused by the university. They have also been using the hashtag #BlackAtCal to celebrate the accomplishments of black students and disseminate important information that affects the Black student body.

The retention rate for Black students at East Bay is 27 percent, second only to Native Hawaiian students who make up one percent of student body, according to the National Center of Education Statistics.

A 2013 data report found that students who identify as Black or African American make up 11 percent of East Bay’s student body population.
East Bay has received national recognition for their commitment to produce diverse graduates within the STEM field. In a June press release the magazine “Diverse: Issues in Higher Education” said CSUEB’s student body is the most diverse in the state and the fifth most diverse in the nation.

However, faculty diversity does not reflect the student body at the school. A center for educational statistics, Integrated Post secondary Education Data System (IPEDS) revealed 21 of 809 faculty members identified as Black/African American at CSUEB in 2014.

“How can you talk about diversity and how can we talk about how diverse we are and what a shining example we are when you take a look at our faculty? ” said Dr. Terry Jones, in an interview with University of Southern California Social Welfare Archives organization. “It’s a disgrace.”

Black students involved at CSUEB are using the BlackOut activities to respond to under-representation in faculty and feeling unsupported in programming endeavors that cater to the Black community. Some Black students have expressed concerns over transparency and how quickly the event took place.
“I feel like it was just a rushed event. I would rather it take longer [to plan] so that more people are invested in it” says student Kelsea Hawthorne. In the meeting it was made clear that this was not a one time event.

“As a collective we intend to meet with administrators in the coming week regarding our demands,” said Selina Smith. “Personally I’d like to get some staff insight on the issues because right now we have a lot of student input.”
According to Black Student Union advisor Marc Strong, the BlackOut on Wednesday got the attention of some faculty and staff that are interested in lending their support to help turn their demands into a reality for students. 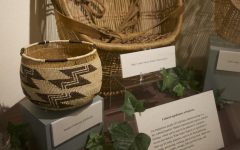 A Microcosm of Native American History on Our Campus 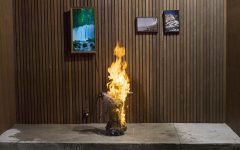 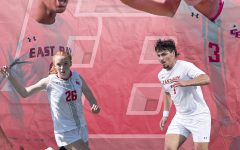 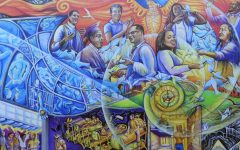 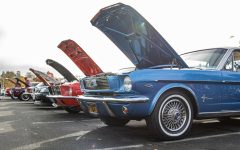