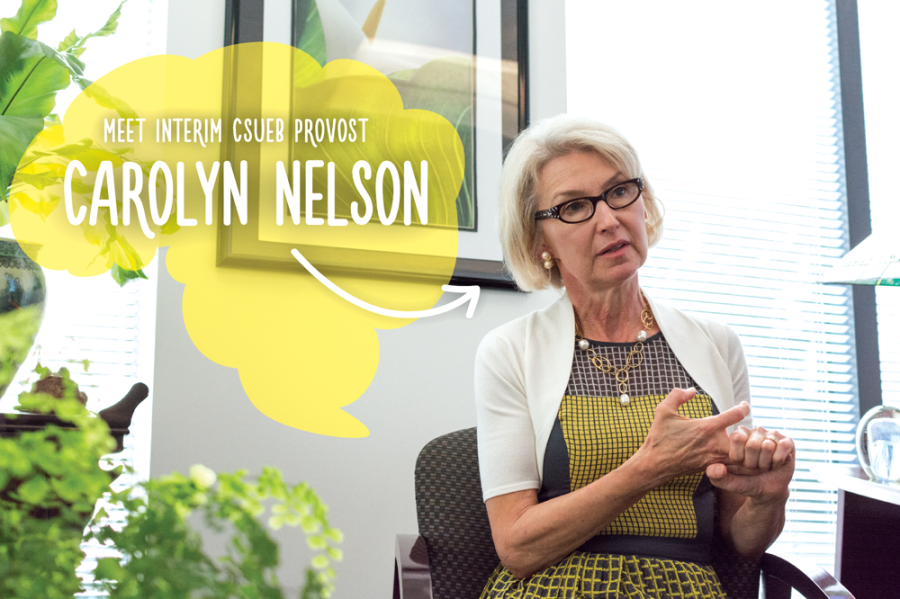 When you walk into Carolyn Nelson’s office it feels welcoming, almost like a living room.

It definitely doesn’t feel like the office of the interim provost and vice president of Academic Affairs at Cal State East Bay. That is the way the former middle and high school teacher wanted it, welcoming.

“I wanted to have a more personal space here, not so rigid,” Nelson said. “I wanted to create the conditions where people can have constructive conversations where every perspective can be given. Differing opinions can create some great results.”

Nelson has only been in her role since August, when CSUEB President Leroy M. Morishita announced that former Provost James Houpis would step down and focus on “pursuing several interests.” Nelson held the Dean of the College of Education and Allied Studies department position since 2009 at CSUEB until she took over for Houpis on Aug. 22. While she credited the job her predecessor did in the position, she seemed enthusiastic about several key areas.

She expressed the importance of service learning, a technique that combines community service with instruction and reflection, to enhance the educational experience for students and strengthen the relationships between schools and communities.

“It helps students apply the learnings from classes and coursework in the real world and especially the community,” she explained. “We do it well here but eventually we would like every student [to] have some of these experiences.”

The provost is responsible for ensuring that students get the best possible support and resources to have success in college and after. Nelson emphasized that the support is not just limited to academics but also other aspects of students’ lives. She acknowledged that most students have more on their plates than just academics, her goal is to give them an ample amount of support and resources to help them all around.

Nelson pointed out the annual student day of service at CSUEB, as well as several programs that involve tutoring and community cleanup projects. She expressed that it would be ideal to get every student a paid internship and service learning experience, as well as experience in their fields of study before they graduate to ensure their success after obtaining a degree.

CSUEB is known as a “commuter campus” where a lot of students do not live on campus and also work. Nelson credited the ability of CSUEB students to juggle multiple things in addition to school, such as work and family life, like she did during her time at the University of Nebraska when she worked and lived off campus. When Nelson was a junior her brother was a sophomore and her sister was a freshman at the university.
“We all worked,” Nelson said. “We had to get to class in whatever was available once it was time to go. So if that meant piling up in Dad’s pickup truck then that’s what we did.”
Nelson feels that if CSUEB can work with businesses who pay interns it could provide valuable field experience. While she did recognize that getting new things funded could be a hurdle she is confident that through grants and other financial options a dent can be made.

“Grants are important,” Nelson said. “We were able to pay one student’s bus fare to an internship through a grant.”

Nelson also has some Bay Area roots as she received her master’s and doctorate from the University of San Francisco. She worked as a high school biology teacher and a middle school science teacher before she was hired by San Jose State University, where she was employed in several roles until her hiring at CSUEB.