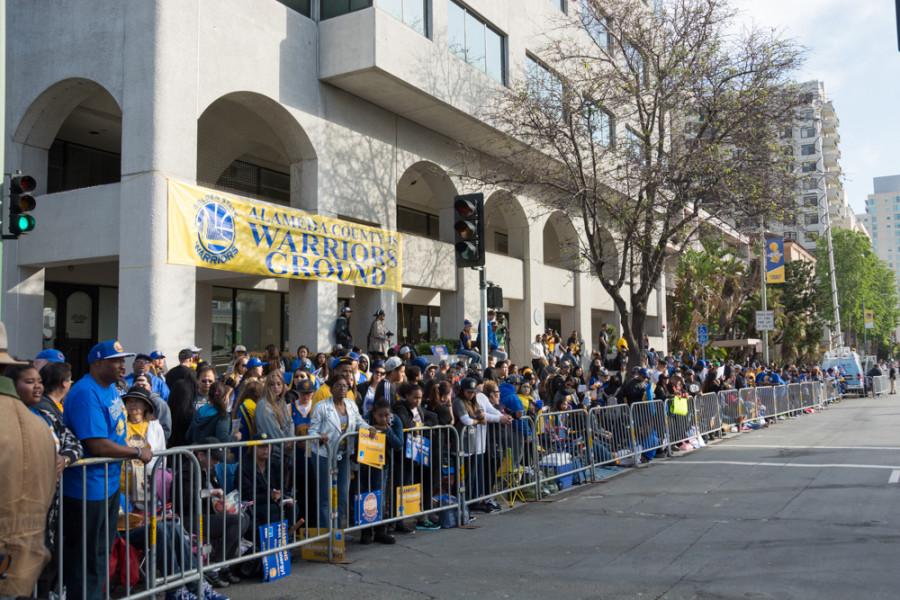 The Golden State Warriors returned home to Oakland on Friday and celebrated their first NBA championship in 40 years with the city and their fans.

City officials said more than one million people descended on Downtown Oakland to participate in the festivities that included a parade and a rally where the players spoke to the crowd.

“Hopefully this isn’t a one time thing,” Stephen Curry said to the crowd. “We want to do this every year.”
Many fans in attendance acknowledged how special this day was, but the lingering relocation of their beloved “Dubs” was on many of their minds.

“Great, we finally win one and then we move to San Fran?” Warriors fan Augustine Ramos said at the rally. “All my life I have been waiting for my hometown team to win a ship. We finally get a star MVP player and a ship and now they’re gonna take it from us.”

Fans like Ramos are in fear of losing their Oakland franchise to the Mission Bay neighborhood of San Francisco, which is the reported site of their new arena. The new building is being privately funded on private land and is expected to be open for the 2018-2019 season, according to the NBA.

While Oakland celebrated, lawmakers in Sacramento on Friday made the new San Francisco arena deal a lot easier to finalize when they included an environmental law exemption for the planned Warriors stadium at San Francisco’s Mission Bay in the state budget proposal unveiled last week.

The new development requires an environmental impact report detailing what wildlife and animals will be displaced by construction and the plans to rectify displacement, which will be waived for one year due to the new law exemption.

The Mission Bay Alliance is one of the main opponents of the proposed Warriors event center and according to them “The proposed stadium will have a disastrous impact on the health and welfare of thousands of patients and families.” They also stated the new arena would block access to medical services, make parking difficult and cause traffic around the area to hit a complete halt during the 225 events that are planned each year in addition to sports events.

The new arena is located near several hospitals, including those specific for women, children, cancer and cardiology. There is a public hearing regarding the San Francisco arena plan on June 30 at City Hall and public input is being listened to at the meetings until July 20.

With the move to San Francisco seeming more likely fans will just have to appreciate Oracle Arena for the few seasons it has left. Oracle has become known as one of the loudest and hardest places to play in the league. It has been nicknamed “Roaracle” for the decibel level the fans reach and this season the Warriors were 39-2 at home in the regular season this year.

“Hands down this is the best place to play in the league,” Warriors fan and parade attendee John Simon said. “Moving could make all of that different. The crowd isn’t going to be the same and that’s a huge factor when it comes to home-court advantage.”