Golden State on cusp of championship 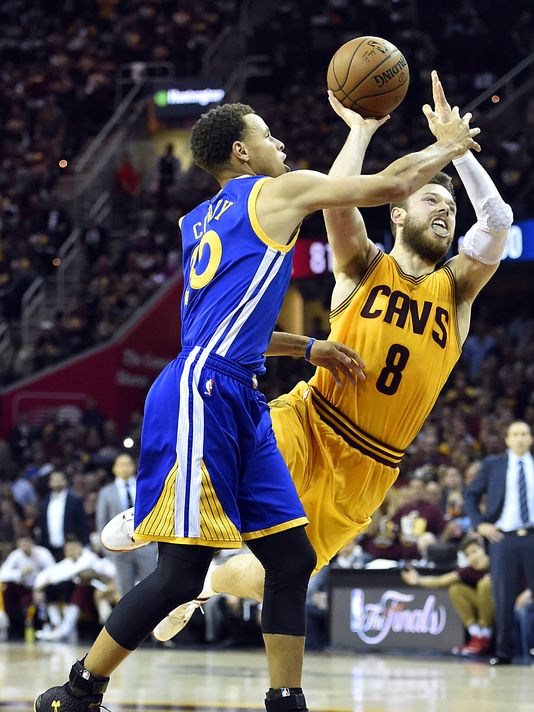 Courtesy of the NBA

The NBA’s Most Valuable Player showed up huge and guided his team to victory on Sunday night in Oakland.

Stephen Curry tallied 37 points, 7 rebounds and 4 assists in the 104-91 victory for Golden State that overshadowed Lebron James’ second triple double of the finals. James finished with 40 points, 14 rebounds and 11 assists in the losing effort for Cleveland. Two of the NBA’s brightest stars lived up to the hype despite the “small ball” lineup used by both coaches.

“I thought from the very beginning when they went small and had their shooters out there that this was Steph’s night,” Warriors Head Coach Steve Kerr said in a press conference after the game. “He took over the game down the stretch and it was fantastic.”

James nailed a deep 3-pointer early in the fourth quarter and Curry came down on the next possession to knock down his own 3-pointer for the Warriors first lead in the final quarter which they never relinquished.

“That was big,” Curry said following the game. “We went up by two and got our crowd back into it so that was a huge possession.”

Curry’s seven 3-pointers helped the Warriors outgun the Cavaliers and James, which also gave Golden State a 3-2 advantage in the series with the next game on Tuesday in Cleveland. The Warriors will be looking to secure their first NBA championship since 1975.

The Game 4 hero for Golden State, Andre Iguodala, got his second start of the season and despite the gaudy numbers put up by James he managed to hold him in check for most of the game while adding in 14 points in the victory. Cleveland’s Game 4 leading scorer, Timofey Mosgov, was not used much by Cavaliers Head Coach David Blatt and had no points in nine minutes on the floor.

“They went small and so I wanted to counter that with a small lineup,” Blatt said after the game. “Not a lot you can do honestly, [Curry] made some terrific shots, there were a few extremely difficult high level shots.”

Third-year man Draymond Green was effective for the Warriors on offense and looked to drive the ball more to the basket instead of settling for outside shots. Green finished the game with 16 points, 9 rebounds and 6 assists in the win.

Golden State took advantage of the Cavaliers mistakes and recorded 18 fast break points and 15 second chance opportunities on offense which led to key baskets for the Warriors. With Cleveland down by just seven points with a little under three minutes left to play Golden State nabbed three consecutive offensive rebounds that killed nearly a minute on the game clock and increased the lead to 10 points after a Curry contested three-pointer.

“We don’t want them to celebrate at all, whether it’s on our court or theirs,” James said in a press conference following the game. “If we keep making the same mistakes and don’t fix it they’ll raise the trophy.”

The other half of the splash brothers, Klay Thompson, continued to struggle with his shot and finished the game with 12 points on 5-for-14 shooting from the field. Veteran Leandro Barbosa provided the spark off the bench for the Warriors and scored 13 points in just 17 minutes of playing time.

Game 6 will be at 6 p.m. in Cleveland on Tuesday and will give Golden State the opportunity to secure its first NBA championship in over 40 years.

“The closeout game is always the hardest game in any series,” Kerr said. “There is a lot of emotion, you are right there on the cusp of something and you have to get the job done. It’s going to be hard and that’s just the way it is.”