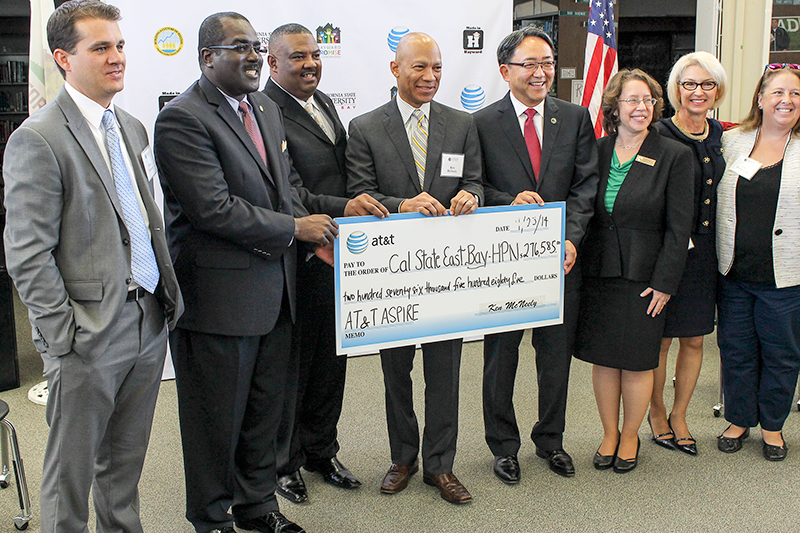 California State University, East Bay received a grant of $276,000 from AT&T on Tuesday to support the Hayward Promise Neighborhood initiative to provide support structures for traditionally underserved students in the local community.

“We’ve been motivated for some time to address the high school dropout rate,” said Ken McNeely, president of AT&T California. “We saw the HPN program as really a great example of schools working together with families in the community to help support student achievement.”

The grant money is intended to increase the amount of Service Learning students providing academic support, such as tutoring, to more than 3,000 students at the six target schools: Harder and Park Elementary Schools, Winton and Cesar Chavez Middle Schools, and Hayward and Tennyson High Schools.

Emily Chow, HPN outreach coordinator, works with the Service Learning students at CSUEB and said the most difficult part was recruiting tutors. She said they had 42 last year and are hoping for more this year with the additional grant money.

Paola Diaz, recent graduate and HPN tutor since 2012, said each tutor works with four to five students to help with homework and other course material.Joel Komorita, business major and HPN tutor, said a lot of students faced special challenges being non-native English speakers.

More than 50 languages are spoken by children attending the six target schools, with English literacy tutoring considered a community priority, according to the HPN website.
At the high school level, the student mentors go beyond academic tutoring to offer assistance in the college application process, too.

“A lot of them are first-generation, so their parents haven’t gone through the college process,” said Allison Zuckerbrow, college and career adviser at the two high schools. “So a lot of them don’t know, first-hand, what to do.”

Zuckerbrow splits her time between Hayward and Tennyson High Schools helping students learn more about financial aid and the college choices that are open to them, including local HPN options Chabot College and CSUEB.

In addition to academic support, local community organizations, such as the Tiburcio Vasquez Health Center and City of Hayward, collaborate to address other needs of the area’s residents, ranging from prenatal healthcare to community policing.

HPN was awarded a five-year, $25 million Promise Neighborhood grant from the U.S. Department of Education to improve the Jackson Triangle area of Hayward, which is bounded by Jackson Street, Harder Road and Whitman Street, as a part of a larger effort to improve the long-term well being of that community.