On Friday, a scene played out on the streets of Oakland that can only be described as premeditated chaos. 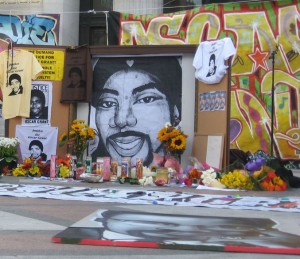 Both protesters and police came well prepared for a confrontation.

The events started with a planned rally outside Oakland City Hall, which occurred after the sentencing of convicted former BART police officer Johannes Mehserle was announced.

The rally, which began around 2 p.m. and immediately followed the sentencing, was peaceful.

It was centered around art displays, musical performances and impromptu speeches.

Although the crowd was justifiably emotional, the mood of those in attendance was not overtly hostile.

Around 6 p.m., rally organizers vacated the stage in accordance with a prior agreement with Oakland city officials.

At this point the crowd began to thin out, and it seemed for a moment that the day might end as it had begun: in peace and order.

Just then, a crowd that had formed on the corner of 14th Street and Broadway, began to march south. As the protesters made their way towards Lake Merritt, a small number began jumping on parked vehicles, with sporadic cases of vandalism being reported.

Following an incident that allegedly involved a protester stripping a firearm from a police officer, Batts announced that the march had become an “illegal assembly,” stating that the police would take “very serious action.”

This marked a dramatic shift in policy as the hundreds of police officers who had converged on Oakland from all over Northern California began arresting anyone who remained in what was now referred to as the “crime scene.”

The 152 protestors that remained in the sectioned-off area between Foothill Boulevard and 18th Street were arrested by riot gear-clad police and placed on buses that were to make their way to the Alameda County Jail for processing.

Chief Batts confirmed that the majority of those arrested were from outside of Oakland.

Most will face minor charges such as trespassing. However, a handful of protestors were charged with crimes including destruction of property and assault.

No Justice, No Peace?

Without pointing fingers, questions linger over whom amongst the crowd could be responsible for the type of destruction that has marred recent demonstrations in Oakland.

Although no one encouraged violent confrontation or vandalism, the rhetoric espoused by the many groups who were represented at Friday’s rally by no means discouraged it.

A young male wearing a paper cutout of Oscar Grant’s picture as a mask passed out leaflets for an unidentifiable group which read, “The smashed windows and burning cars are only the expression of anger towards the pigs.”

If taken literally, even the phrase “no justice no peace,” which is often thrown around, can take on a whole new meaning.

In such an emotionally charged environment, history has shown time and again what can happen when anger manifests itself amongst a large group of people.

For better or worse, Oscar Grant has become a rallying point for social movements that have much larger agendas than the sentencing of Johannes Mehserle.

At the rally, a speaker named Mamma Iona alluded to this phenomena by stating, “some people are here to be opportunists.”

With so many protestors and members of the media focusing on the Mehserle trial, opportunities have abounded for activists trying to get their point across.

Last year, The Revolution Club, Bay Area announced a protest against police brutality by declaring, “FIGHT BACK! WEAR BLACK!” In July, they prefaced the Mehserle trial verdict by posting on their website, “Whatever the Verdict: The Whole Damn System Is Guilty.”

It should not come as a surprise then, when protestors—often Caucasian males dressed in black clothing with bandanas over their faces—show up looking for trouble.

At Friday’s rally, an unidentified supporter of the Revolutionary Communist Party, USA—a group that has been present from the beginning of what is now known as the “Oscar Grant Movement”—put the Mehserle sentencing in this perspective: “The police and the media have always supported the capitalist class,” and “We’re looking for a revolution.”

When asked whether the RCP supports extreme civil disobedience, he stated, “if people do, people do it.”

“Were looking for more than just civil disobedience,” stated another anonymous protestor who was passing out literature for The International Communist Workers Party. “The system is based on exploitation, it’s a class society.”

A society, which he believes, should be chipped away at “bit by bit.”

What does class conflict and Karl Marx have to do with Oscar Grant? According to many of the protestors, quite a bit.

Jack Heyman of the International Longshore and Warehouse Union, addressed the crowd by asking “where are rights for people of color in this country?” Heyman also drew comparisons between the economic system of the United States and social injustice, citing recent labor strikes in France as an example of how workers are, “striking back against the capitalists.”

America needs to take a good look at what is happening in Oakland. Although Oscar Grant could never have imagined that he would become the center of a discussion about social struggle, he has. For hundreds of demonstrators, the struggle has not ended with Mehserle’s sentence.