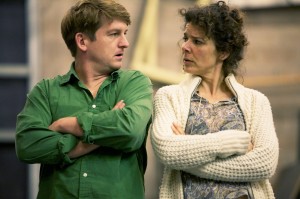 The play is presented by The Shotgun Players and was well received by Bay Area residents.

Schwartz is a graduate of Juilliard and received a fellowship in their Lila Acheson Wallace Playwriting Program.

Shuch not only directed the play but used her dance background to help choreograph it as well.

“She kind of looked at this piece as a big piece of choreography in many ways,” said Danielle Thomsen, the stage manager of the theater. “It’s like a giant poem; it’s not just a play.”

Some spectators believed that her background in dance also played a hand in how the stage was set up.

“[It] was definitely interesting staging,” said Rae Bittle, a San Francisco resident. “The director is also a choreographer so perhaps that’s one of the reasons for its innovative staging.”

The first thing that caught people’s attention as they entered the theater was the white set and curtains that covered the stage.

“One thing that was really catching my eye was the stage itself,” said Bittle. “It was very beautiful and since it was raked, it really enhanced the staging of the play.”

The show starts when  two adults run to the center of the stage to inform the audience that their young son has just died.

In the hospital, their  daughter comes out to sing about the atmosphere in the room while doctors can be seen walking around the stage.

To avoid dealing with reality, the father fills his life with work and meaningless affair. The father is always on a business trip but interestingly enough, everyone he meets has lost a child as well.

The mother appears to be on the verge of a nervous breakdown as she attempts to take care of their daughter while he is away.  Their daughter plays a huge role in guiding both parents in moving on with their lives.

She doesn’t do it by herself as she has help from the Tooth Fairy and G.I. Joe.

In the end, the once shattered family is together again and the final stage in the healing process is complete.

“I thought it was very good,” said Davida Munkres, an East Bay resident. “Each of the characters had something really special to bring to it.”

To go with the touching storyline, songs with elements of comedy in them can be heard throughout the show.

“I’ve seen it come a long way from the development process to now,” said Thomsen. “Having been fortunate enough to have been a part of the process, I’ve watched it grow and become this.”

Audience members could not stop talking about the show as they walked out of the theater at the end.

“Don’t come in with any sort of set expectations about an exact storyline,” said Bittle. “If your looking for something a bit unusual then this is definitely the play for you.”

“God’s Ear” will be playing at the Ashby Theater through June 20. Tickets for upcoming shows are still available.