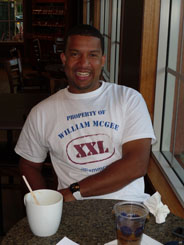 William McGee, 32, candidate for a seat on the Hayward Unified School District Board of Trustees is a teacher, and a graduate at CSUEB in Educational Leadership.

“We need to get the school board to a place where the students are the primary focus when it’s time to make decisions,” said McGee.

McGee has been a teacher in Hayward for more than six years, at schools such as Hayward Adult School and Hayward High.
Having been in the classroom for several years, as well as being a basketball referee for adolescents, an important part of McGee’s mission statement in his bid for election has to do with creating a safer learning environment.

“I just fielded a call from a parent today who told me she pulled her child out of Hayward schools and has him going to Castro Valley schools, ‘cause he’s being bullied in Hayward,” he said.

“There was a fight, and the police tried to deem it as a ‘melee.’ I don’t know the specifics,” he said.

“I met another parent at the grocery, and she told me she hadn’t had her child in school for over a week and a half because of what’s been going on, on the campus. So these are things that, as a board member, you need to be in tune with,” McGee said.

He continued, “it seems that some of our current board aren’t the most in tune with what’s going on in the community.”

McGee feels a deep-seated affection and commitment to the community. Trying to get students actively interested in continuing their education beyond K-12 is a priority.

Though born in Santa Clara, he has become a stalwart citizen of Hayward.

“I fell in love with Hayward when I started teaching here,” said McGee.

McGee spent some time in his mother’s home state of Virginia, and likes to incorporate some of that out-of-state perspective into the classroom. He points out that many Californians only know California, and some know little beyond their own neighborhood.

“When I was teaching here, as well as in East Palo Alto, college was my thing. Connecting students to college,” McGee said.
“So I organized trips where I took students to CSUEB, and from East Palo Alto, some of those students had never been across the Dumbarton Bridge, and when we’re going across, the kids were ‘Ooh, the mountains, the hills,’ he said.

“My thing is trying to show students what they’re interested in, like music and the arts, and the sports,” he said.

“Once we get you hooked, once we get you caught up, like we’re fishing, now we can bring these academics in, like the reading, writing and arithmetic,” McGee said.

Showing students the bigger picture, according to McGee, will inspire them to learn the “three R’s” well enough to enable them to pursue their newfound passion, or at least to let them know that options are available.

The “three r’s” McGee is referring to respect, responsibility and results.

“Our school board must be held accountable for high standards and responsible use of public funds. Respect needs to be demonstrated toward our staff, teachers, and students. I will work hard to ensure that our students have the tools necessary to achieve success in college or career. To do this, we must work together in partnership with the community to identify problems and define solutions,” according to McGee’s website.

McGee appeared very relaxed and comfortable in the world as he sipped coffee at Peet’s on a recent Sunday afternoon; furthermore, unlike many candidates running in this midterm election, he offered nothing negative about the other four people vying for the two full term seats available on the school board.

Three of the four other contenders, Audie Bock, E. Sue Lafferty, and Sheila Sims, are educators, two of whom are retired, and the other one, Lisa Brunner, is a parent. McGee said that he would be honored to serve with any of them on the HUSD Board of trustees.

McGee knows that an elected position is no walk in the park, and feels that being a basketball referee with dedicated and enthusiastic parents in the stands, has toughened his skin enough to withstand anything the job may throw at him.

“Basketball is great, because as an official, I have to have thick skin, and I know coming to the school board is going to be the same thing,” McGee said.

“Because you got to understand that people are not necessarily upset with you but it’s with what’s going on.”
“Building a culture of success is a task I am happy to take on for our students, our parents, our community, and for the success of our school district,” said McGee.