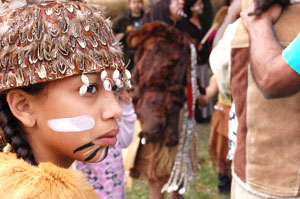 Visitors to the 2010 Gathering of Ohlone Peoples at Coyote Hills Regional Park last Sunday were greeted by the sounds of a drum, shakers, clapper sticks, and some 40 or 50 voices singing ancient songs in an ancient tongue, and the sight of male and female dancers, in full regalia, in a moving display of visual prayer.
“When we’re dancing, we’re dancing with our regalia, we’re wearing our ancestors,” said Tony Cerda, chairman of the Costanoan-Rumsen Carmel Tribe, speaking of his tribe’s Humaya dancers.
Ancestry is vital to the nine Ohlone organizations petitioning the Bureau of Indian Affairs for tribal recognition, several over 500 members strong. Dedicated research of mission registers found that there were originally over 50 village communities, or tribes that now fall under the common umbrella of “Ohlone,” based on the common roots of their spoken languages. Today, most Bay Area residents think that “Ohlone” is just the name of an East Bay community college.
Each piece of the costumes, or regalia, is significant. Cerda explained what he meant by saying they were wearing their ancestors.
“Because they were the ones that would come and eat the grass, and the little rabbit, and the eagle would swoop down and eat the rabbit. Because eating is a violent act, regardless if it’s a plant or an animal, something must die so you can eat,” Cerda said.
“So, as indigenous people they would pray to the spirit of the plant or the animal, and they would make a promise, ‘If you give your life so that my family can eat, when I die, I will feed your family,” Cerda continued.
“So that’s what we did. We die, and the grass grows, and the rabbit goes and eats the grass, and the fliers come and eat the rabbit, and we become a part of everything, the bushes, the trees, the rabbits, the eagles, and everything that lives in the ocean,” Cerda said.
“When we call our ancestors to join us, they’re already here. We’re all a part of everything,” he said.
The male regalia, each personally created by it wearer, included aspects of each thing that Cerda named. “Breechclouts” consisted of animal skins, tule grass, abalone and other shell beads, as well as eagle feathers.
Both male and female headdresses, though different, held feathers pointed skyward so that the eagle might more rapidly fly their prayers to the creator.
Male and female dancers were decorated in alternating applications of makeup, or “medicine,’ to balance both good and evil. The torsos of the male dancers were similarly adorned.
“And we end always in white, cause we want to have more positive in our lives,” said “Kainkarte” Carla Munoz of the Rumsen Tribe.
“Also, when we ask our ancestors into the circle, it’s so they can recognize us, ‘cause we used to tattoo our faces, but we don’t anymore, so we use our medicine on our faces,” she added.
“Our headdresses represent the baskets we used to make and rely on, ‘cause underneath the feathers are baskets, and the feathers represent the winged animals […] and we also have shells to block our faces, so when it’s time for the ancestors to go they know they’re not holding on to us still. They represent the ocean where we come from and we always use a lot of olivella and abalone, and the abalone is for the protection of our people,” Munoz said.
With fur and tule grass, the elements of the males’ regalia are also in the female version. A dozen strands of black and white beads were worn across the females’ “apron” (lower abdomen) to represent the 12 missions the Ohlone were forced to build. Each ended with abalone for protection.
The onslaught of Spaniards very nearly obliterated the Ohlone. According to a history recounted by Rosemary Cambra, et.al, of the Muwekma Tribe,
“Of the approximately over twenty thousand Ohlonean speaking people who inhabited the greater San Francisco/Monterey Bay regions in 1769, less than 2000 were left by 1810,” Cambra wrote.
According to event coordinator, Beverly Ortiz, Ph.D., who is also an anthropology lecturer at CSU East Bay, in spite of the disruption and devastation after the occupation of conquering forces began in 1769,
[…], “an astonishing amount of ancestral knowledge has been preserved, due to the courage, bigheartedness and profound determination of many elders to share that knowledge,” Ortiz wrote.
The Ohlone gathering, served two predominant purposes. 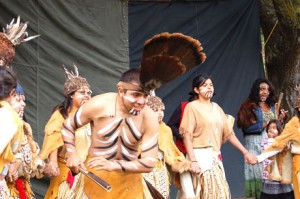 First, it was much like a giant family reunion to which the public happened to be invited. There were several tribes represented, and nowhere in history or current times have Ohlone peoples viewed themselves as a single community; however, they would meet multiple times throughout the year to share knowledge, celebrate the change of seasons, and gather for the health and continued prosperity of the people. Many of this extended “family” only see each other at such events. With the shared history of blood and strife, it is vital to keep the heritage alive for the good of all who refuse to lose it.
Second, it served as a marvelous educational tool for the diverse community in attendance. An informed populace is far more tolerant and supportive than an ignorant one. The assembled visitors had access to a myriad of booths and tables that offered entertaining and enlightening activities for children of all ages.
Elsewhere, there were demonstrations and displays of various native crafts, tools, knowledge, and lore to be shared.
Diversity was the watchword of the day. When all is said and done, our commonalities bind us; our differences give us cause to celebrate.