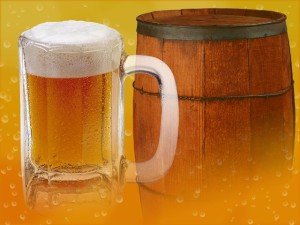 Beer Revolution, located in Oakland at Jack London Square, is a new watering hole for the thirsty beer drinker craving something rather inimitable. The business opened up in February, with a rotating supply of fourteen draft beers that change daily. Their unique blend of brewed products offers an air of refreshment for those seeking new beer. The institution is owned by married couple Rebecca and Fraggle. Rebecca said she learned her craft from her uncle when she was eight years old. Fraggle has worked for other brewing companies before getting involved in his own business.
Their business lives up to its name with unique products, like Allagash Black and Moonlight Death & Taxes, which has a strong taste of coffee with a dash of hops. If your tastes are suited for something heavier, they sell stouts, like Anderson Valley’s Barney Flats Stout. Everything from porters to pale ales is within their repertoire, with a blend of schmaltz and scotch in the beer recipes.
The alcoholic content of the beverages ranges from the lowest of six, to as high as twelve percent. Thus, a few drinks are enough to loosen up the tie after work.
The menu carries strange and unique names, that will easily leave a new comer lost. There is no need to fear though, as Rebecca and Fraggle know best how to suit your needs. Just a few moments of conversation shows their vast knowledge of beer and their long years of experience making it.
The place has a friendly vibe, and is enjoyable and relaxing with a mix of customers that range from college students to men in suits.

It smells more strongly of beer than other bars or breweries and its design alone cognates with the smell. The “tables” are beer barrels with beer caps embroiled into the surface. The walls are covered with beer paraphernalia and a refrigerator stocked to the brim with vast amounts of beers. The beer sold is from 24 different distributers from surrounding breweries in the Bay Area.
The music alone creates an edgy vibe with harsh punk rock on the sound system. You’ll hear everything from Social Distortion to Discharge.
The owners and patrons are friendly, and generally remember names. The institution has grown fairly well since opening earlier this year, establishing a strong local connection. It prevailed solely, as Fraggle states, by “word of mouth,” and by means of social networking like Facebook.
While they don’t make food themselves (other than their BBQ Sundays) you can bring your own food in from the local restaurants, such as the next door Vegan Soul Food or Buttercup restaurant across the street.
Whether you are a beer lover or an occasional drinker, Beer Revolution is a new and engaging location for everyone.